Skin allergy or allergic contact dermatitis is a body's response to a certain substance, usually resulting in a rash, anywhere from an hour to a week after exposure. What defines the allergy is that it usually happens with a substance not usually associated with a harsh compound. Some examples of substances that can cause an allergic reactions are: nickel, rubber (for example latex), chromates (chemicals containing chromium used to tan leather among other things).

To determine the source of the allergic reaction, we use a technique known as Skin Patch Testing. Patch testing is used in conjunction with an allergy focused medical history and can help to confirm the existence of an allergy to either a food or inhaled substance.

Patch testing helps identify which substances may be causing a delayed-type allergic reaction and allergens often not identified by blood testing or skin prick testing. A grid of patches (sometimes just a few, but perhaps 100 or more) soaked in a diluted solution of likely allergens is applied to the patient's back. The standard range of chemicals included in most patch test kits are the offenders in approximately 85–90 percent of contact allergic eczema reactions and include chemicals present in metals (e.g., nickel), rubber, leather, formaldehyde, lanolin, fragrance, toiletries, hair dyes, medicine, pharmaceutical items, food, drink, preservative, and other additives.

Patch testing is a simple, safe test, providing results after the patches have been left in place for 48 hours and the the results are checked when the patches are removed and 72 to 96 hours after application. Hence up to three clinic appointments will be required. 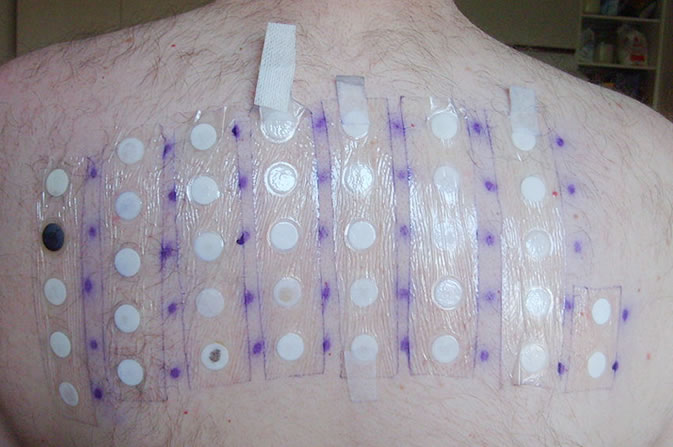 Application of the patches will take about half an hour. They are held in place with an hypoallergenic adhesive tape and often covered with a special transparent waterproof dressing to protect them and keep them dry. The patches stay in place undisturbed for at least 48 hours. Getting the back wet during patch testing should be avoided (no shower) and it is a good idea to avoid any activities that might disturb the patches.

At the second appointment, usually 48 hours later, the patches are removed and a preliminary assessment of the degree of response is done. To be more confident that what is shown is an allergic response, these marks must be visible at the third appointment, usually 24–48 hours later (72–96 hours after application). In some cases, a reading at 7 days may be requested as there are a few subsutances where the onset of response can be delayed.

No reaction to the tested alergens may indicate that the patient is not sensitive to that allergen. Negative reactions may occur for other reasons. This is why it is important the results are interpreted by a healthcare professional. In some cases, the doctor may request a blood test to help clarify the results.